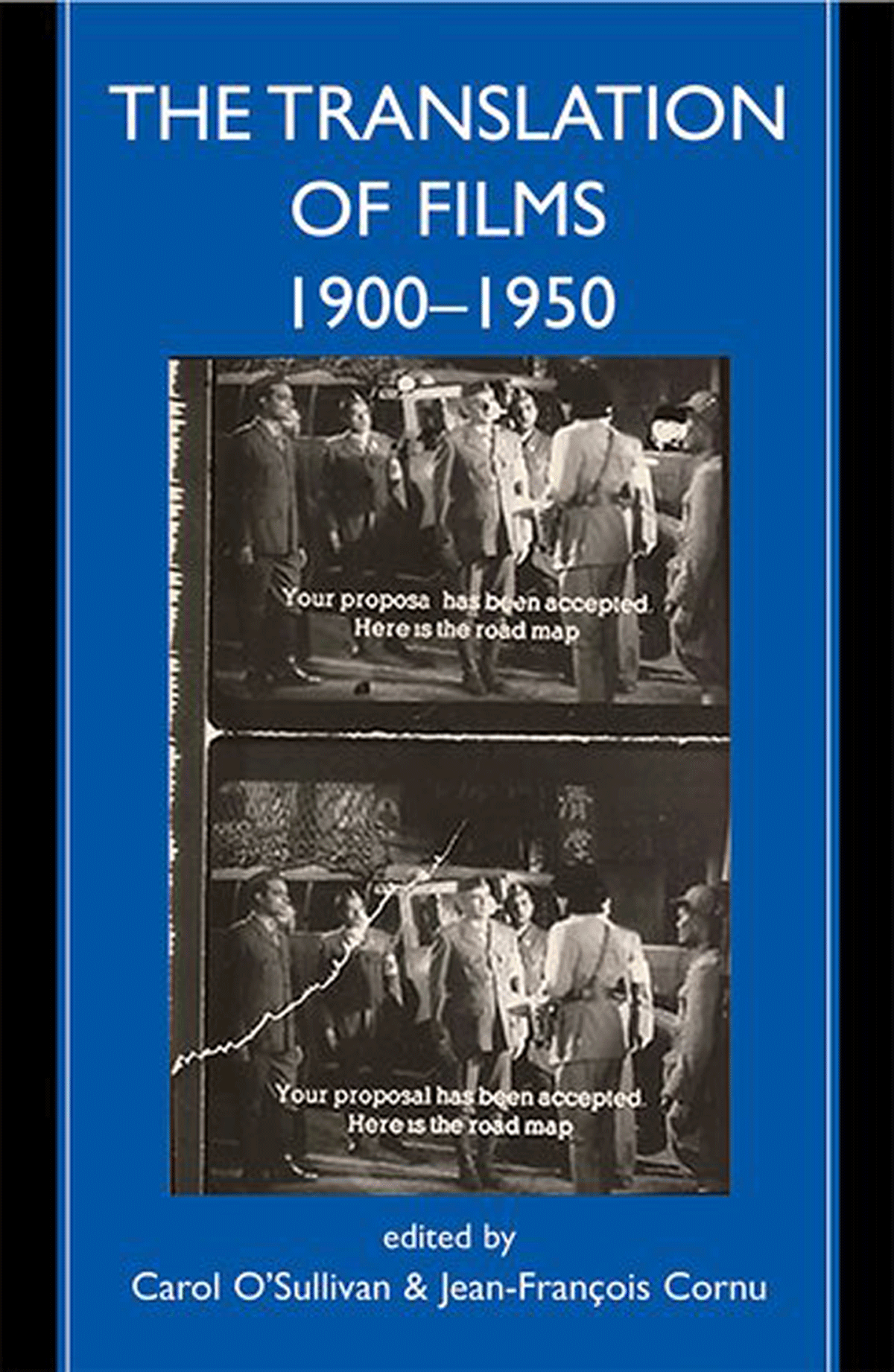 The Translation of Films, 1900–1950, edited by Carol O’Sullivan and Jean-François Cornu, conducts a wide-ranging survey of the early history of film translation across a world of cinemas. Translation, as a category of analysis, is understood by O’Sullivan and Cornu in the wider sense: ‘to cover not only “modes of translation” and language transfer activity, but related interventions of all kinds’ (p. 8). In this diverse collection that comprises 14 individual chapters, which are bookended by an introduction and a conclusion, the translation practices examined include different aesthetic approaches and attitudes towards subtitling and dubbing; the industrialisation of translation techniques like the standardisation of intertitles; the linguistic challenges posed by song and music; and the cultural and ideological demands of localising translations for different groups of audiences.

Building on the existing work on the politics and aesthetics of film translation done by scholars like Abé Mark Nornes (2007) and Ella Shohat and Robert Stam (1985), the book is underpinned by three key aims. Firstly, the collection sets out to question the assumed universality of non-synchronised sound films by highlighting the ‘complex translation workflows’ that were developed by studios and practitioners from all over the world (p. 8). In Chapter 3, for instance, Claire Dupré la Tour looks at the industrialised strategies adopted by Pathé to standardise their intertitles (like using a particular lettering or a specific shade of red or orange), and argues that these practices can be understood as a way to make it easier for their films to be distributed and exhibited across the world, and also as a marketing strategy designed to make the audience think of Pathé as a mark of quality. In another example, in Chapter 8, Adrián Fuentes-Luque highlights the difficulties faced by Hollywood in their attempt to sell films to the Spanish-speaking areas in Latin America, and how Hollywood had to ultimately adopt Iberian Spanish as the “neutral” subbing accent so as to mitigate the various forms of nationalism in Latin America.

The second objective of the collected edition is to complicate ‘the close association of specific territories with specific modes of audiovisual translation’ (p. 9). As O’Sullivan and Cornu note, ‘accounts of the history of film translation by scholars in translation studies have tended to give fairly simplistic labels to film territories’ (films were dubbed in France whereas films were subtitled in Greece, et cetera) and, in this respect, the book provides a more nuanced idea of the multi-faceted translation practices in different territories (p. 9). For one, in Chapter 13, Rachel Weissbrod offers a history and politics of film translation in Mandatory Palestine, as the region negotiated between the adoption of either subbing or dubbing. In a similar vein, in Chapter 14, Christopher Natzén demonstrates how the Swedish film industry, after experimenting with different forms of translation approaches, settled on subtitling as the more economically sustainable option.

The third goal of the book is to challenge ‘the idealisation of the original film’ (p. 10). For O’Sullivan and Cornu, the quest for the “original film” or the film with the “best” aesthetic qualities is an inherently futile approach in the study of cinematic translation because ‘[t]ranslated films could be textually very different from their originals, and it is those altered versions with which the historian of film must engage’ (p. 10). Throughout the edited collection, there is an acute awareness of the sense of lack associated with archival research, as different scholars and practitioners in the various chapters adopt different methodologies to piece together their historiographies. In Chapter 5, Charles Barr examines how censorship in the Soviet Union affected the cultural translation of a 1922 Anglo-American film, Three Lost Ghosts. Now considered to be a “lost film”, Barr turns to other sources like the original novel and play text and various translated documents in both Sweden and Moscow to piece together a version of the “original” film so as to do a comparative analysis of the Anglo-American and the Soviet versions. More explicitly, in Chapter 15, O’Sullivan devotes a significant portion of her chapter to examining the methodological challenges of writing a history of subtitling, and the practical constraints of dealing with films in the archives are also articulated by professional archivists and restorers like Bryony Dixon (Chapter 2), Dominique Moustacchi (Chapter 4) and Thomas C. Christensen (Chapter 6).

Focusing on the early history of cinema, this edited collection paints a very vivid survey of the different practices used by various film industries from 1900 to 1950 via meticulous archival research. Altogether, this collection offers a rich addition to our understanding of the complex history of film translation.