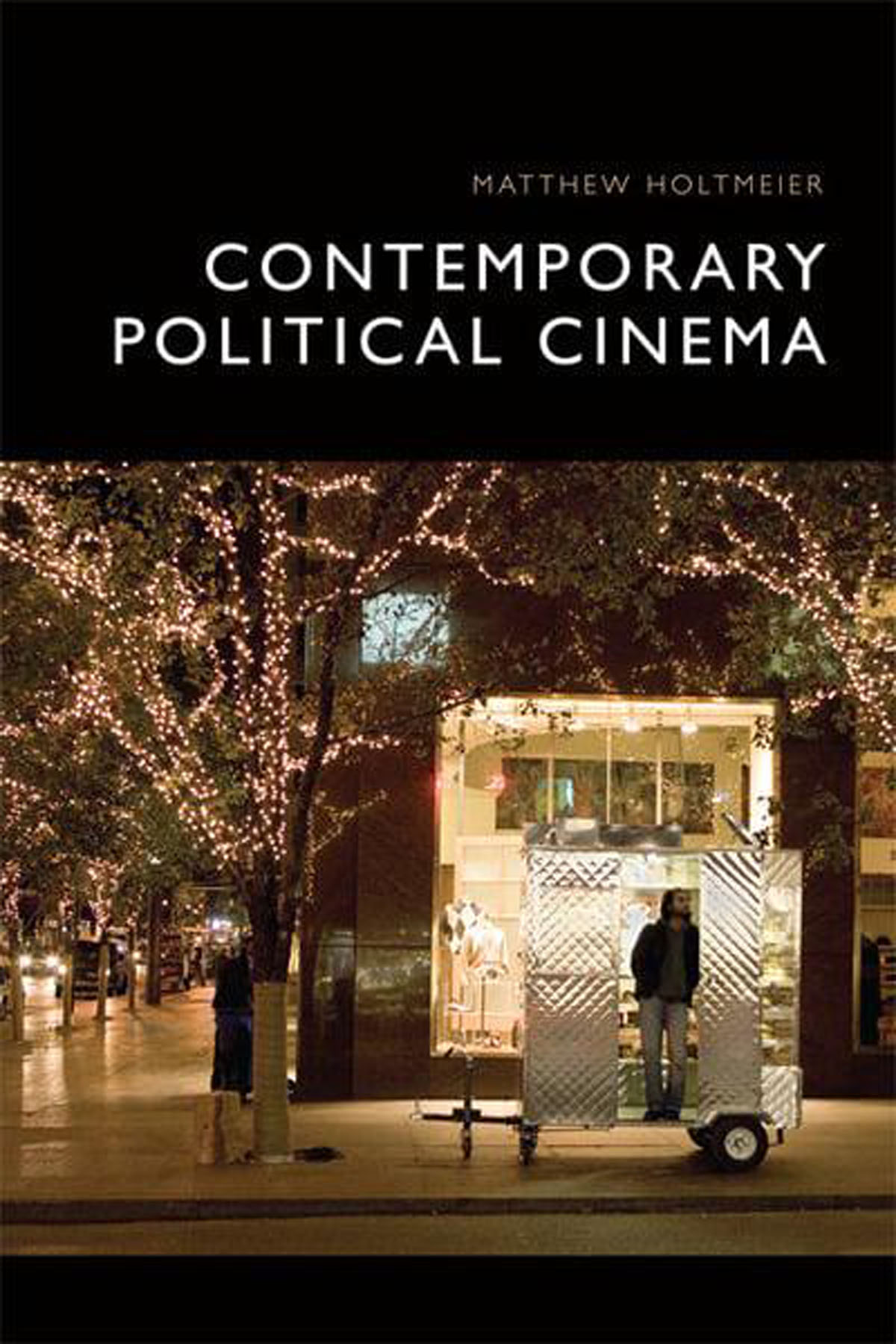 This book sets out in its opening sentences its belief that a generational shift has occurred defining a new era of political cinema. Author Matthew Holtmeier defines this shift through a changing notion of subjectivity in comparison to what he calls the ‘classical’ political cinema of The Battleship Potemkin (1925) and Battle of Algiers (1966), whose chief interest is the moment the protagonist is spurred to action (in a protest over rations in the former film and the witnessing of political executions in the latter). Holtmeier notes contemporary political cinema’s representation of a different kind of transformation, one that lingers on the ambiguities of introspection and on moments of impasse and rejects the clarity of purpose of what the left used to call consciousness-raising.

Holtmeier deliberately avoids discussing films that outline a political programme and chooses to dwell instead on those that dramatise the difficulties inherent to any given situation. He begins with the 2010 Algerian film Outside the Law, which he contrasts to Battle for Algiers for its production of heterogeneous identities that cannot easily be assimilated into the earlier film’s call for a revolutionary national unity. He then discusses Bab El-Oued City (1994) and Timbuktu (2014) for their presentation of situations of ‘intolerability’, brought about in both circumstances by the subjection of a populace to Sharia law. The subsequent three chapters are each devoted to a chosen auteur, firstly the Iranian-Kurd Bahman Ghobadi and his cinematic visions of minority subjects within the majoritarian culture of official Iranian state discourse. Jia Zhangke provides a study of aimlessness in the context of China’s one child policy and post-socialist economic transformations, while the final chapter considers Iranian-American filmmaker Ramin Bahrani and his critical relationship to the American Dream, which Holtmeier contrasts to the individualistic, feelgood narrative The Pursuit of Happyness.

Where Holtmeier’s analysis is especially strong is its recognition that politics can be found in more than the simple statement of injustice, as he agglomerates ideas of heterogeneity, intolerability, minority positions, aimlessness and the lack of success as each expressing a politicising subjectivity. Holtmeier’s theoretical understanding is indebted to the role played by states of inaction and uncertainty in the thought of French philosopher Gilles Delueze, and he makes frequent reference also to Foucauldian biopolitics for its emphasis on the body rather than the public sphere as the site of struggle, as well as Hardt and Negri’s move away from class towards the multitude. While the theoretical references are largely Eurocentric – one wonders what Frantz Fanon or Achille Mbembe would make of the arguments – the geographical scope of the films incorporates Africa, Asia and the Middle East, and finally independent US cinema (one notes the preponderance of men as both filmmakers and protagonists).

Perhaps fittingly for its subject, this is a book with a lengthy introduction and no conclusion. But a closing statement of intent can be gleaned from Holtmeier’s admiration for US filmmaker Bahrani and his refusal of utopian ideals of success. According to Holtmeier, Bahrani’s cinema rejects ‘gaudy Hollywood tales [that] do not mitigate real life suffering’, and choose instead to highlight ‘the possibility of engaging in the biopolitical production of subjectivity on screen that engages the subjectivity of spectators’ p.164. Yet one can’t help wondering if this position could also be subject to a political critique. Passive uncertainty may well be an appropriate response to neoliberal disempowerment as well as an ethical stand against the dogmatic failure of 20th century models of change. But where does it leave hopes for any change beyond the transformation of an individual’s problematic subjectivity? Holtmeier states his artistic preference for arthouse and festival circuit cinema, but is the relative exclusivity of these circuits not an issue? Potemkin and Algiers were attempts to revolutionise popular cinema, but the importance of contact with a mass audience receives no mention here. And is the contemporary preference for critique over action not itself a product of defeat, and a sign of the inability of political movements to provide an adequate response to popular conditions?

Nevertheless, the book’s understanding that politics means more than just programmatic proclamations puts it in tune with a widespread contemporary mistrust of those who claim to hold easy answers, and establishes that any progressive political vision must accommodate the irreducible value of a diversity of positions. That it does so with a consistent understanding of the artistic manifestation of subjectivity makes it a contribution to the debate not only about the purpose of cinema, but the future of global change.